About 15000km ago I replaced the early Bay beam that had been retrofitted onto my 59 split. I replaced it with a stock K&LP beam and I found some good OG stub axles (which I had "flipped" from someone on here). Fed up with never being able to get the thing to brake in a straight line on it's OG drums, I opted for a CSP disk kit. I haven't looked back since. I read all the instructions, searched the forums and made sure that I put in the right amount of shims to ensure correct steering camber.

At the same time I also fitted a set of Continental Eco 3s all round, so when I recently got the Bus up on the ramps (in the middle of Colombia I hasten to add - we're travelling through South America) I was a little disappointed to see that my reasonably new Contis were properly worn on the inside.

And to make matters worse there was a load of vertical play at both front wheels. There was a good few cms of play between the 12 and 6 o'clock position. I normally don't miss a trick with my Bus but I'd completely overlooked the front end, assuming that all was OK after switching to a stock K&LP beam. How could I have driven around like this for so long without figuring this out sooner

I'd previously done the tracking myself after going to a couple of places in England who couldn't get their equipment to fit over the rear hubs. I'd used string etc. and was satisfied that it was pretty much travelling in a straight line.

So, anyway, once it was up on the ramps I indicated to the Colombian mechanic in the workhop that we needed to adjust the K&LPs. We got to work, he did one side, I did the other and 10 mins later we'd eradicated the verticle play at the road wheels. I was happy and off I went.

So, here's my question. Since that moment in the workshop I have checked for play at the front end 3 times in about 6000km and every time I have had to tighten the K&LPs. Is this normal? how frequently should I be adjusting the K&LPs?

Uneven tyre wear. Is this down to me not keeping an eye on the K&LPs. Have I somehow managed to use the incorrect quantity of shims and am running with too much negative camber? Does running flipped spindles alter the steering geometry to the extent that is alters camber? I didn't believe this to be the case, that's why I oped to "flip".

I don't suspect it to be the tracking - even though it's been done with string, it seems pretty good and too much (or too little) toe-in wouldn't have such an effect on tyre wear as camber would, no?

Would be interested to hear your thoughts. Thanks!
Last edited by eliotc on Wed Dec 18, 2019 5:12 pm, edited 1 time in total.
http://mundo-kombi.com/
FROM MY HOUSE, TO HERS…..
An account of travelling in something very old, a little rusty, and to a place a very long way away.
Top

Bump. Is there no one who can advise me on this?

http://mundo-kombi.com/
FROM MY HOUSE, TO HERS…..
An account of travelling in something very old, a little rusty, and to a place a very long way away.
Top

More likely to be the tracking. That wears the tyres more than camber

You should be regressing and checking the adjustment on K&LP's as per, or even more frequently, than the manual settings, so at least every 2,400 miles.
Supplying quality in house designed items plus parts from SyncLink, Kennedy Clutches, & CB Performance. Also fitting service including modifications & mechanical upgrades.
Top

I had this problem I was adjusting my link pins every 1500 miles by loads and they were shot after 6k,
It seems to have been caused by my old alloys having too much offset.

Sent from my HRY-LX1 using Tapatalk

So inner edge tyre wear is more likely to be as a result of improper tracking in my case and not camber. That's reassuring as I played close attention to my measurements and correct shim placement.

As I understand it, tracking is toe, either in or out. This is adjusted by shortening or elongating track rods (by turning track rod ends). I wont ask what correct toe should be as a Google search gives loads of different results, either in degrees, minutes, mm or fractions of inches and it seems that no one can agree what is factory spec. What I can gather is that there should be a slight amount of toe in.

This brings me to another question. What's likely to produce inner edge tyre wear? Too much toe-out seems the logical answer to me.

I'll get alignment checked and go from there.

I adjusted link pins again yesterday. Hardly any turning of the link pin is needed to take up the verticle play. It feels like it hasn't really moved at all, but you tighten up the pinch bolt after and all is fine.

Than you.
http://mundo-kombi.com/
FROM MY HOUSE, TO HERS…..
An account of travelling in something very old, a little rusty, and to a place a very long way away.
Top

The VW manual / Bentley manuals list the exact tracking settings with the +/- range it should be within.
Supplying quality in house designed items plus parts from SyncLink, Kennedy Clutches, & CB Performance. Also fitting service including modifications & mechanical upgrades.
Top

If I remember rightly tracking on a standard bus is as near as damn it 0.... pretty sure it’s 1mm to 0mm toe in.
Top

My book is in degrees. With a range.

A touch of toe-out through to a little more toe-in, so effectively straight. Just go by the book settings.

As you brake the tracking changes, as you load the bus up it also changes.
Supplying quality in house designed items plus parts from SyncLink, Kennedy Clutches, & CB Performance. Also fitting service including modifications & mechanical upgrades.
Top

The VW manual / Bentley manuals list the exact tracking settings with the +/- range it should be within.

Thanks, Jim. Spending a few days in a camp site just outside Lima so getting the opportunity to work on the van and put all things right and give it another service. When we were in Colombia a guy in a workshop set toe-out at 10º - despite me telling him not to do so, so that'll explain why my reasonably new Conti's are looking so sad after just 25800km. Not having access to alignment equipment, I've given it two turns out on the track rods and I'll fit some cheap front tyres and see how they wear, at least until I can get to a workshop with a mechanic who'll listen to my instructions. 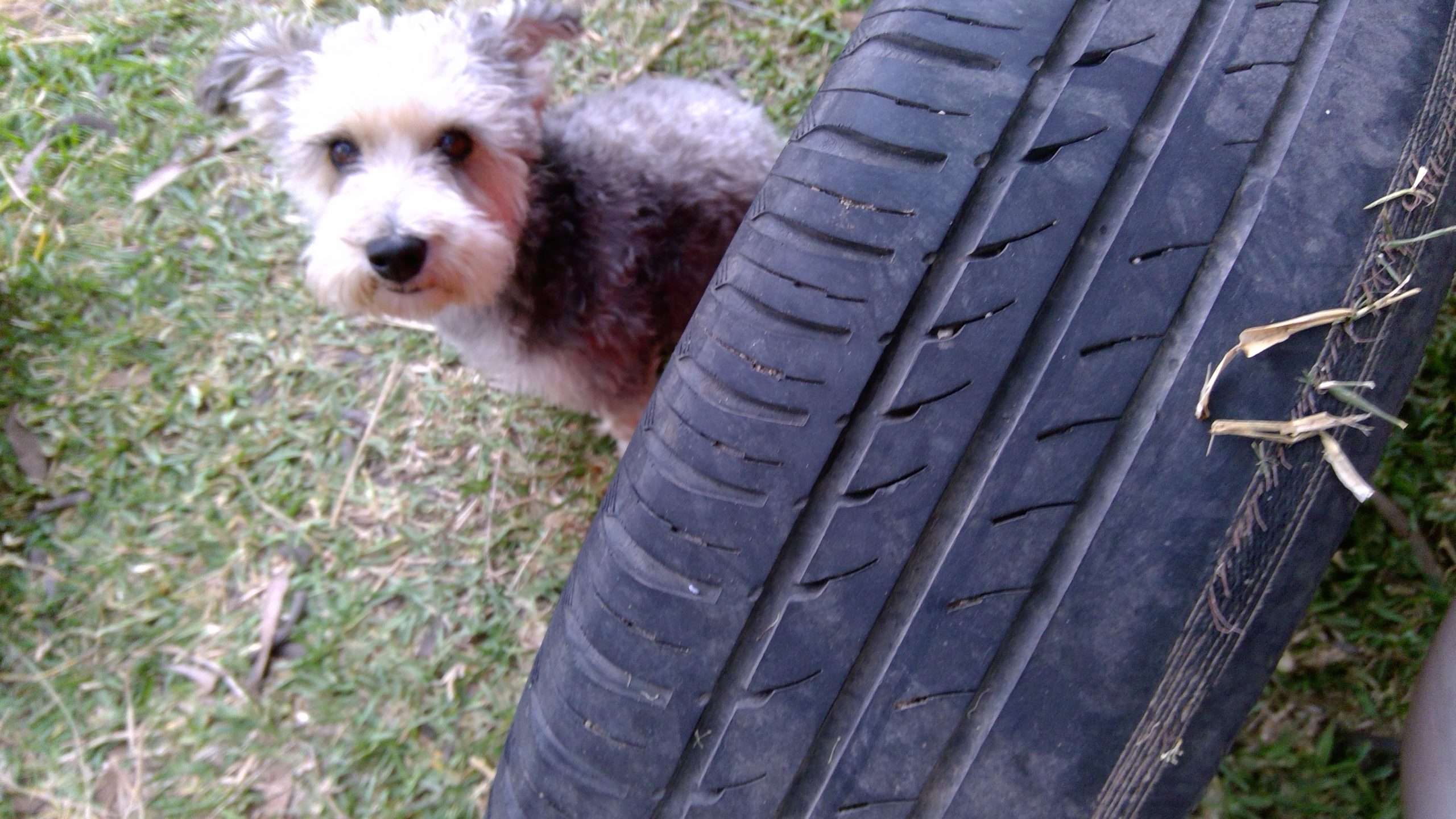 As you can see, the dog wasn't too happy about the state of the tyres

The Steering box protector has suffered the most with all the sleeping policeman, but nothing a big hammer and a vice couldn't put right. We'll spend a couple of weeks in the Lima area before heading up into the mountains and Machu Picchu - more fuel/air mixture and ignition timing adjustment will be needed if were to get up into the mountains at anything more than walking speed

http://mundo-kombi.com/
FROM MY HOUSE, TO HERS…..
An account of travelling in something very old, a little rusty, and to a place a very long way away.
Top

http://mundo-kombi.com/
FROM MY HOUSE, TO HERS…..
An account of travelling in something very old, a little rusty, and to a place a very long way away.
Top
Post Reply
11 posts • Page 1 of 1