I have been reading through the threads here recently and I have been amazed at the work I have seen.

I have got some other projects mostly cleared now and I have been inspired enough to look at finally tackling my old 54 Barndoor which has been stored away for some time.

I had a look at it to plan the move out of storage to the workshop and took a few pics, here are some of them.

Roof gutter above cargo doors is a concern but some other areas seem better than I expected.

This may take some time!

wow, looks like you've got some fun times to be had. What are the plans?

be inspired, visit http://www.paulsrideforlife.co.uk and help raise half a million pounds for Cancer Research 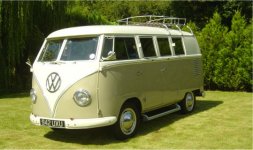 , do you know any of its history ? , (I am just interested, no worries if you do not want the info in the net

looking forward to seeing this one come together

All the Best.... Chris
Please check our website for our remaining Klassicfab stock

nice one another barndoor on the road to recovery
SSVC MODERATOR
http://www.buseswithattitude.co.uk
Top

I remember seeing pics of this about 5 years ago.. still got them at home whne you sent them too me.

Great to see you're starting the project.!!

looks pretty complete.
some interesting upgrades to, like the fuel tank and early style gear knob

Thanks for the comments.

Hi Dean, yes I remember. I think that was when you started on your 54? 5 years. No way! I thought it was a year or 2 ago max.. so I checked; it was Mar 2004!
Not sure what pics I sent you BTW but I couldnt find any I had taken around then so if you still have them do post them, they must lurk on a memory stick here somewhere.

Just looked at the paperwork, 2 previous owners, last just up the road in Hampshire also I found some notes I made in 1990 so that was possibly shortly after I got hold of it (I must have been around 11 or so..). Total cost of required panels to restore was £300 (Musclebus/Chris, I will be in touch re some steel.. )

There is a tatty old notebook I found in the cab that lists mileages between refills, even oil changes, plugs etc. That notebook appears to go from 73 to 76 (7 Gals £4?!) apparently driven frequently between Fishers(?), Exeter and London (23mpg) and mentions reserve so I am not sure if that was with the current fuel tank arrangement. I also need to get the certificate from VW.

I assume the fuel tank is 60's, there is another in the back but not sure if it is BD? I dont think I have a wheel tray, I do have a barndoor lid, not the orig which was once around but dissapeared complete with fittings (It was fine[very] but I am sure it went to scrap). I have some other parts stowed.

It had a later dash installed, removed just before I got hold of it, unfortunately at that time some areas were stripped to metal and it was then left uncovered for a while. Some kids started to damage it - smashed a window or 2, lit a fire in it.. Things were going downhill rapidly. I spent all my pocket money(OK student grant) and eventually got it and stored it.

I think the engine number matches the reg doc, it looks correct(?) but I need to check again.

There is a spare beam assembly in the back - is it early? also there is an extra set of reduction boxes.

I will try to get it rolling tomorrow, so maybe better pics.

Thanks for the history info and extra pics Alex, can't wait to see a pic of the whole bus.....it looks pretty together from what I can see, missing a few Barndoor parts but overall its great

have you a pic of the steering arm placement on that spare beam?, Barndoors are to one side or the other and later buses are positioned in the middle.....

what are your plans for it, total resto or get it rolling and work on it as you go ?

let me know when you know what steel you'll be needing

ps...also please let me know if you ever find you don't need / want that middle seat as I have a good home for it

Please check our website for our remaining Klassicfab stock

Is the black/ pale grey orig?

The grey inside may be og but the darker grey under the lighter grey topcoat (if you see what I mean).... more pics please, it looks like there is plenty of og dove blue left under that top coat

Please check our website for our remaining Klassicfab stock

Looks to be a nice project you have there

The spare reduction boxes that are with it might be the barndoor ones as it looks like it has later ones on there from the pictures.
Good luck and keep the pictures coming

I found the pics I have... i'll get them posted up.

I see theres some Dove Blue OG paint in there too

Heres the pics I have

Excuse the short intermission(!) normal service should soon be resumed, albeit at a steady pace.

Looking to get it into the now larger workshop as soon as I have cleared out a little.

Found this on the cab floor last weekend