type21f wrote: ↑
Wed Jul 12, 2017 7:36 pm
Ah yes..
May need to move the seat back support or modify to account for need to support higher..
Height of tubs has effected the alignment of back and base.
Seat base in pictures should be further back... do need same angle.
Same position kf base but back support higher?
G

weirdly the seat tabs were put in in the same position as my previous bus which was also tubbed. It may go with a little gentle persuasion

It's looking mighty fine! Great work all round

Looking good dude. And we'll done on restoring all your pictures.

There are a couple of Barndoor deluxe's known to have tan seats from factory. Wisk's for example which is a similar age RHD.

thanks dude, i've just learn't Carl's was too so fee less bad about doing it

door cards, kick panels are in, the panel under the dash is original to the bus, original trim and original screws. Lovely touch from Austin! Well happy bout that, thanks so much dude! 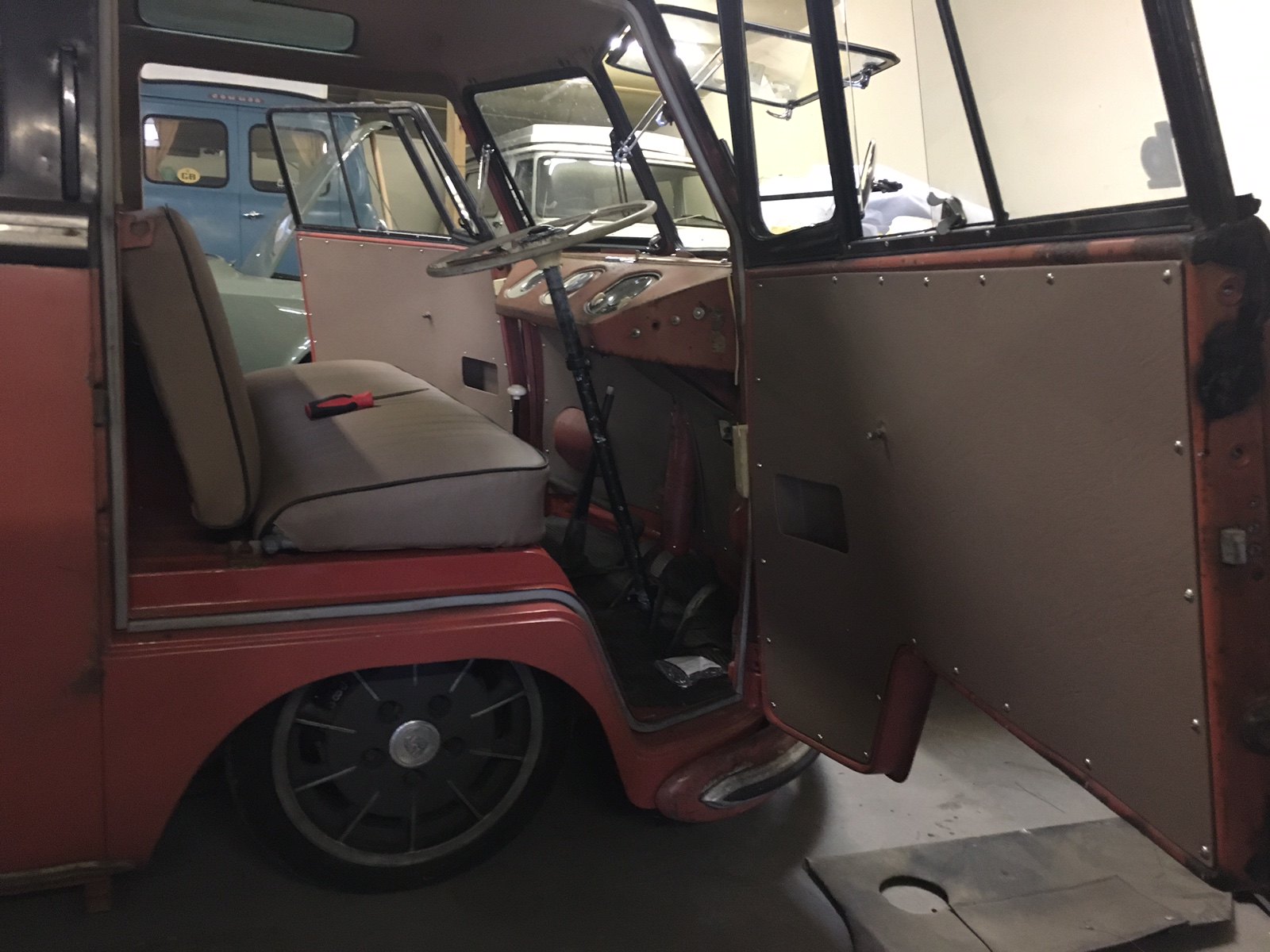 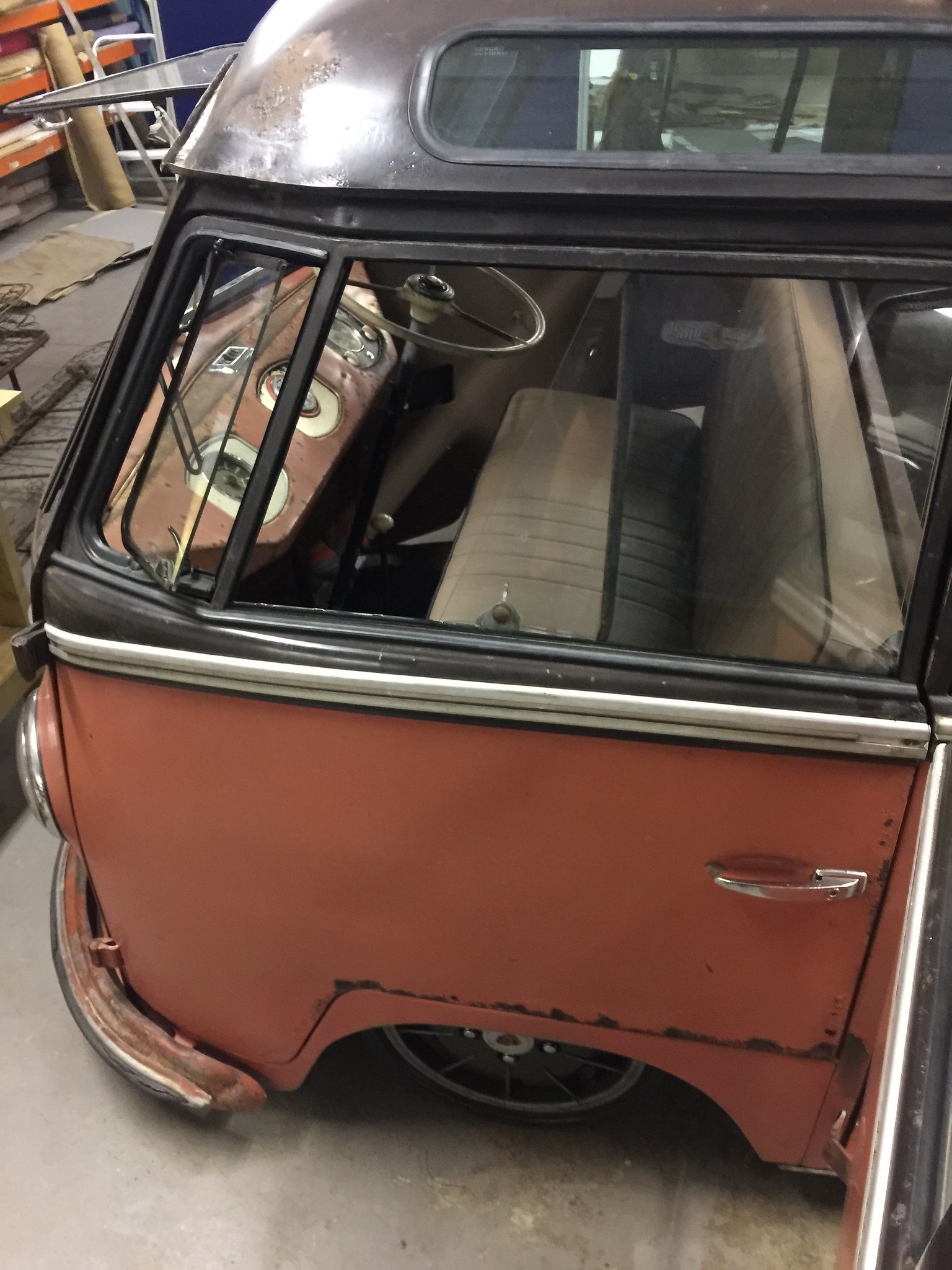 Door pockets lined in the same material too. I dont think this is actually factory?? but looks great 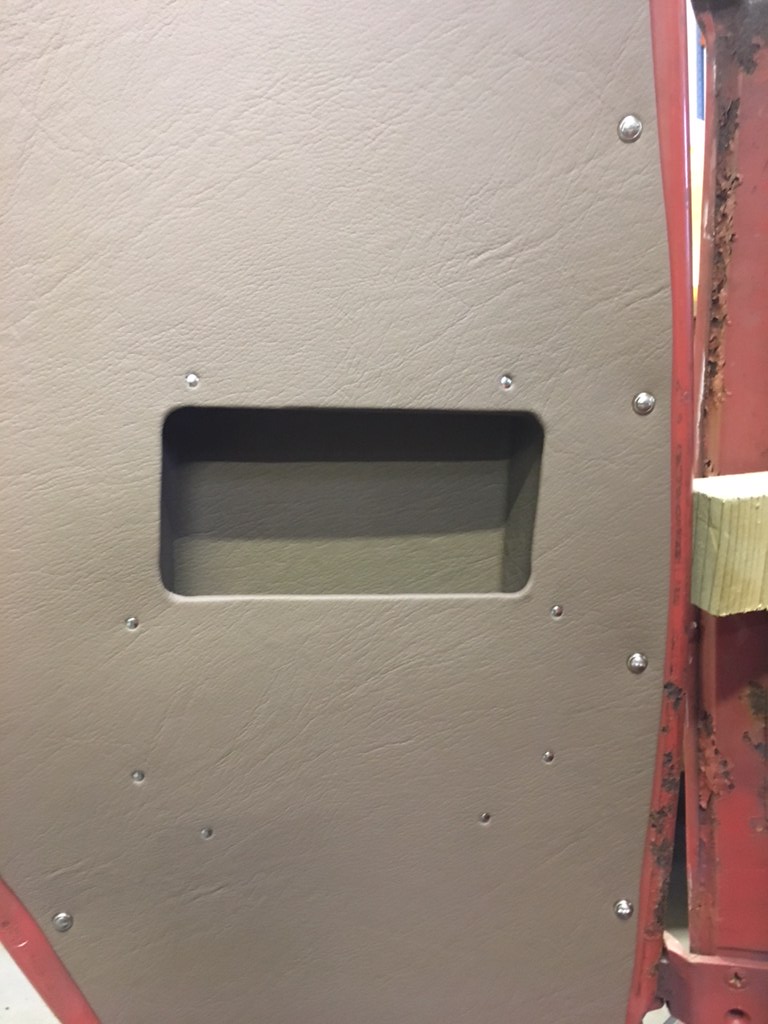 Rear panels glued and ready to go in to 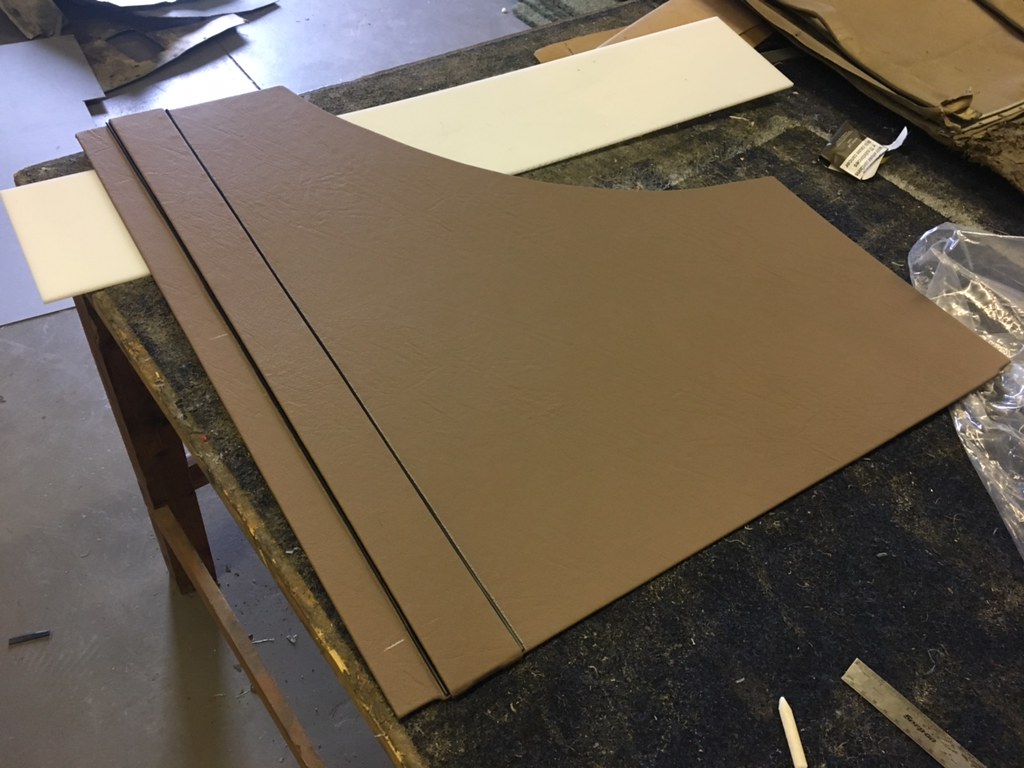 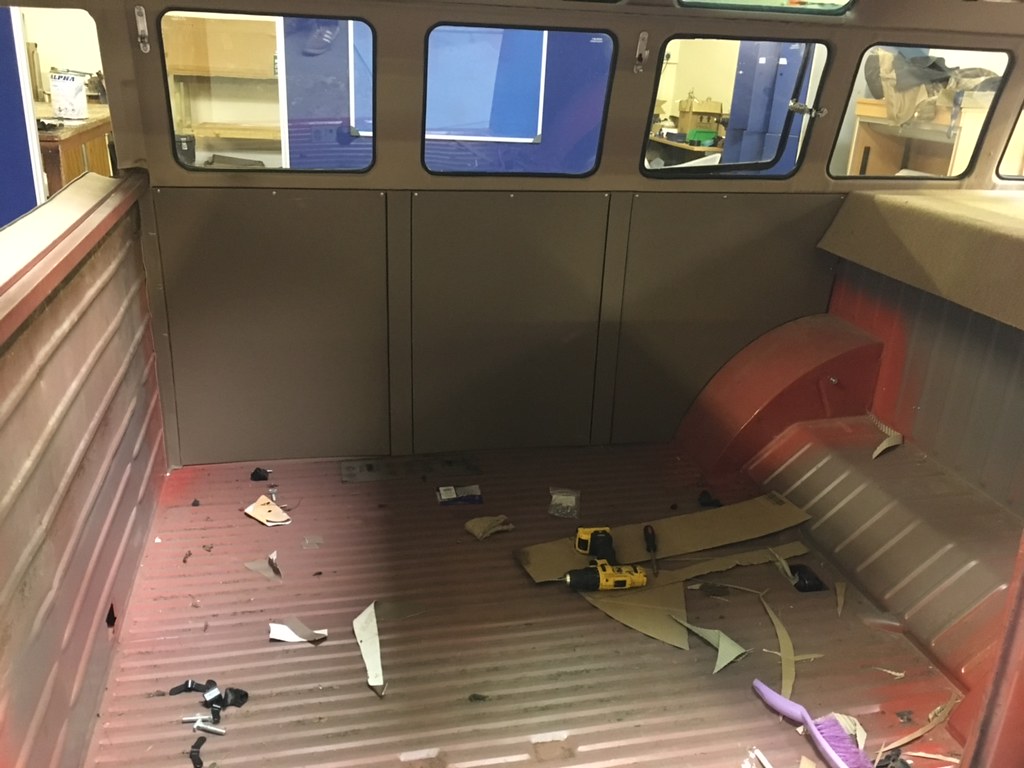 And lastly the material for the rear luggage area arrived too. 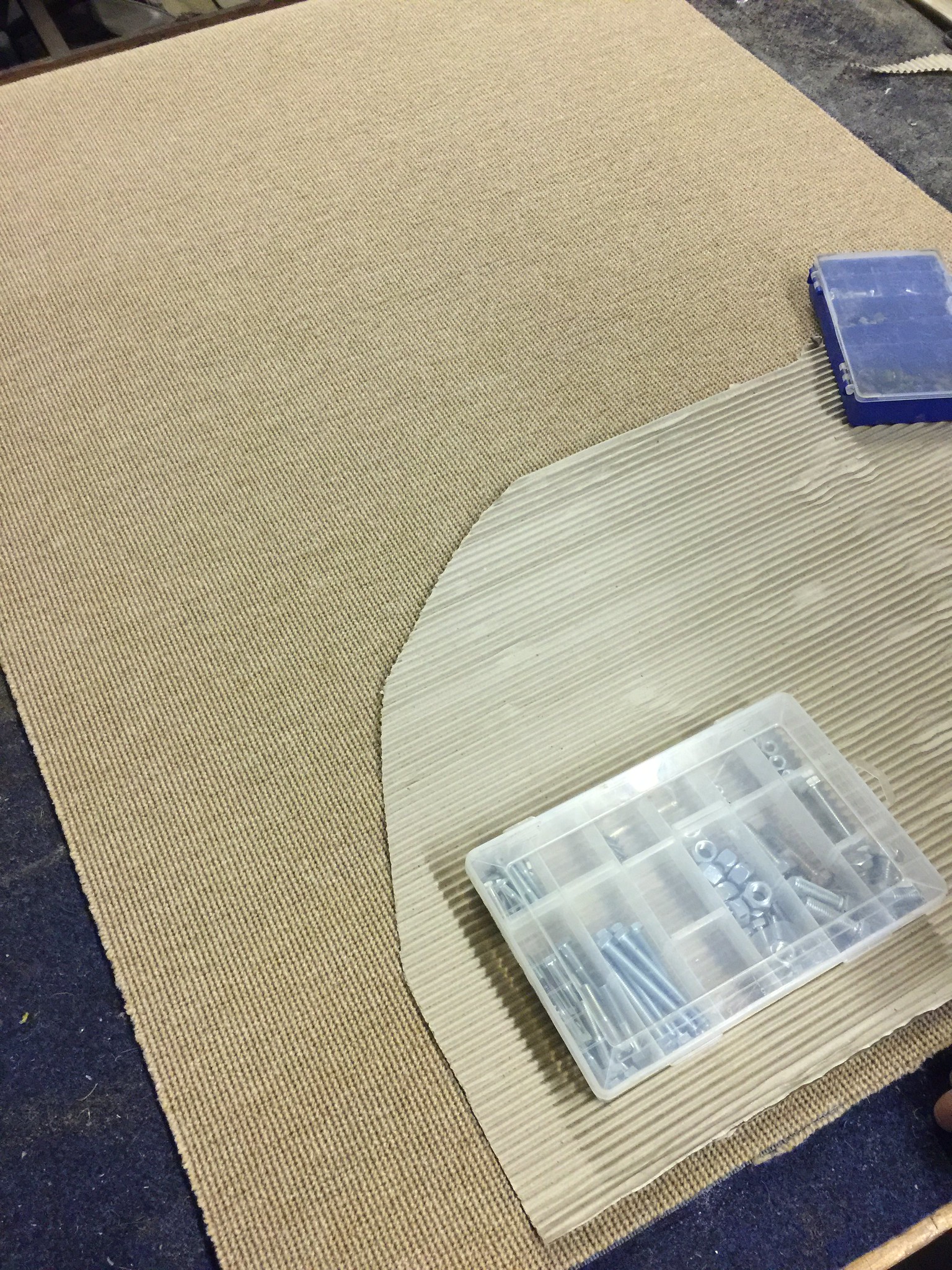 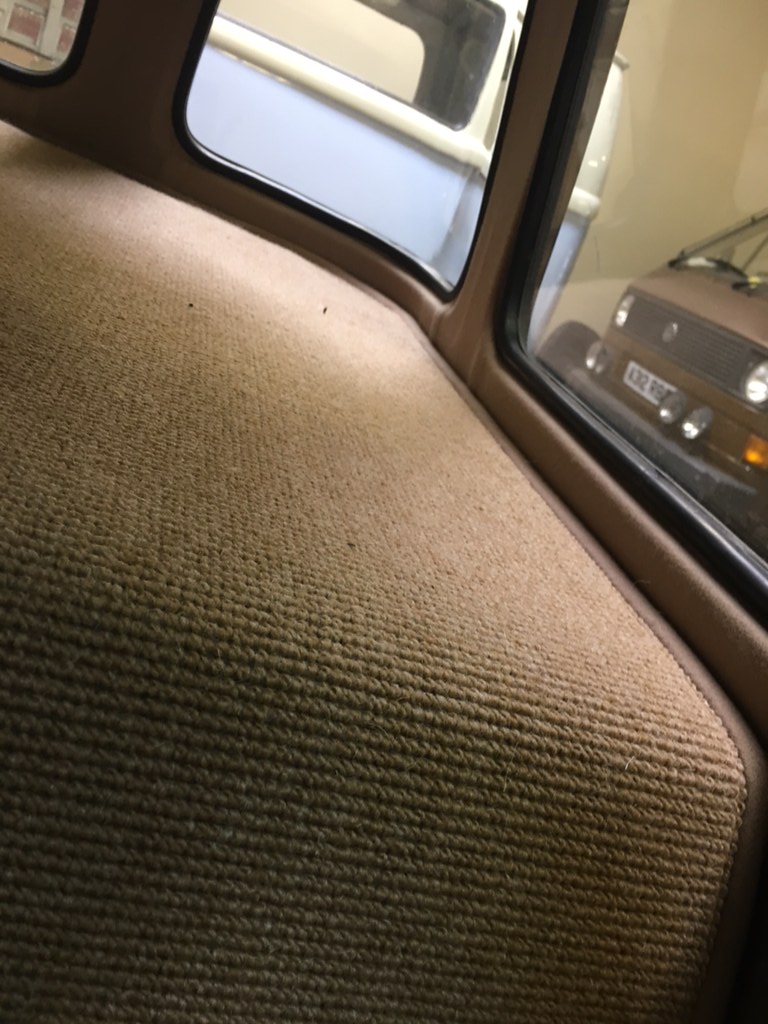 Eventually will be a Camper...
Mmm
LHD... what type of conversion.
Is very early..
Earliest I know is a Poba..
Modular boxes..
Then Campingbox Westfalia..
There is someone making these...
Or around 1956 or 1957
Peter Pitt.. White Family Devon Conversion.
Kevin Jackson could make a great LH curved interior.
He is making a RH suite at the moment.
G

type21f wrote: ↑
Fri Jul 14, 2017 10:30 pm
Eventually will be a Camper...
Mmm
LHD... ehat type of conversion.
Is very early..
Eatliest I know is a Poba..
Modular boxes..
Then Campingbox Westfalia..
There is someone making these...
Or around 1956 or 1957
Peter Pitt.. White Family Devon Conversion.
Kevin Jackson could make a great LH curved interior.
He is making a RH suite at the moment.
G

I wont be going for a full camper interior as such i meant more that it will be used to sleep in. I'm a pretty big dude so i like the bed to be as big as possible. In my last bus it basically had two opposing seats which made a full width bed. Ill be going down a similar route in this shortly.
Top

That will look great...
Although the early deluxe armrests are a thing of beauty!
If you have them...Use them!
G

thanks dude, little update, the bus is looking rad so excited about collecting it 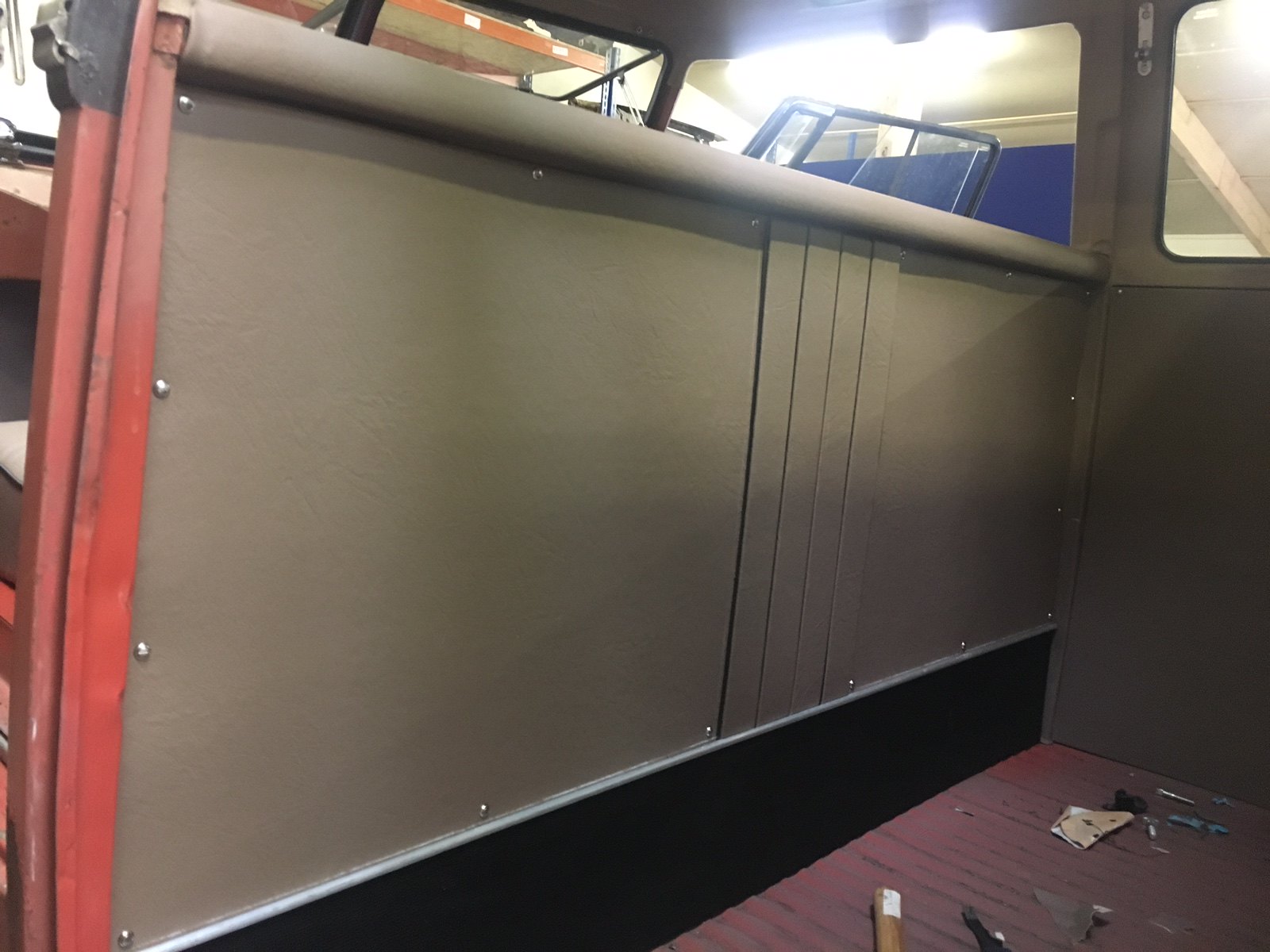 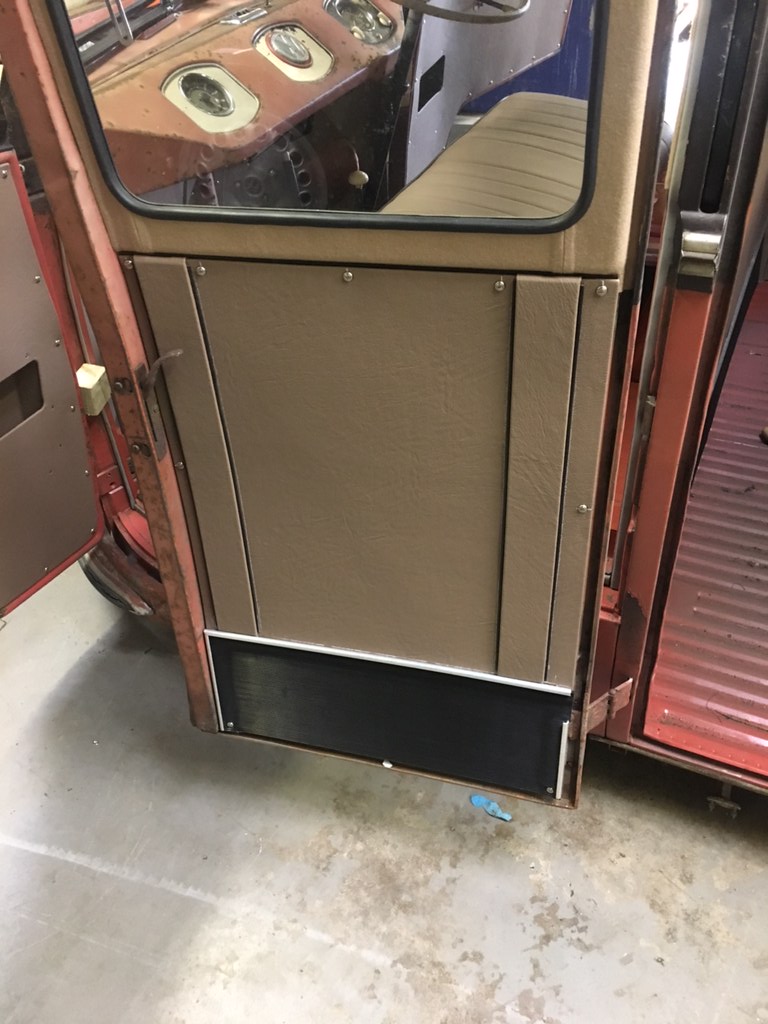 thanks dude, little update, the bus is looking rad so excited about collecting it

I can just imagine a time warp photo composed of your bus now sitting alongside the samba "before extraction from site" ...
G

Wednesday afternoon he messaged me about an "anomaly" he had noticed looking at pics of various buses which have been trimmed recently. His eagle eye spotted on a couple of period photos and also on a tiny snap id found online that the middle seat is infact trimmed slightly differently to that of the rear and the front bench.

So having marked up all the fabric for the middle seat this was swiftly binned and a frantic message exchange with both of us looking for pics of original Barndoor seats.

Without boring you all too much

heres a snap of an original Brown/Brown middle seat. The pleats follow a pattern thick then 4 thin then thick o the fold down seat, the fixed part differes, thick, 5 thins, thick etc etc 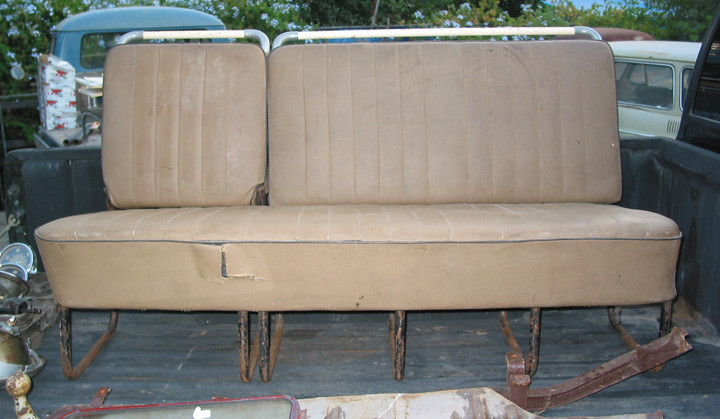 The front and rear seats dont follow this pattern as others have trimmed. I have to be honest and say I would have never noticed but the eagle eyed Watts at Waboo doesn't miss a thing, another reason why i cant recommend him enough!!! 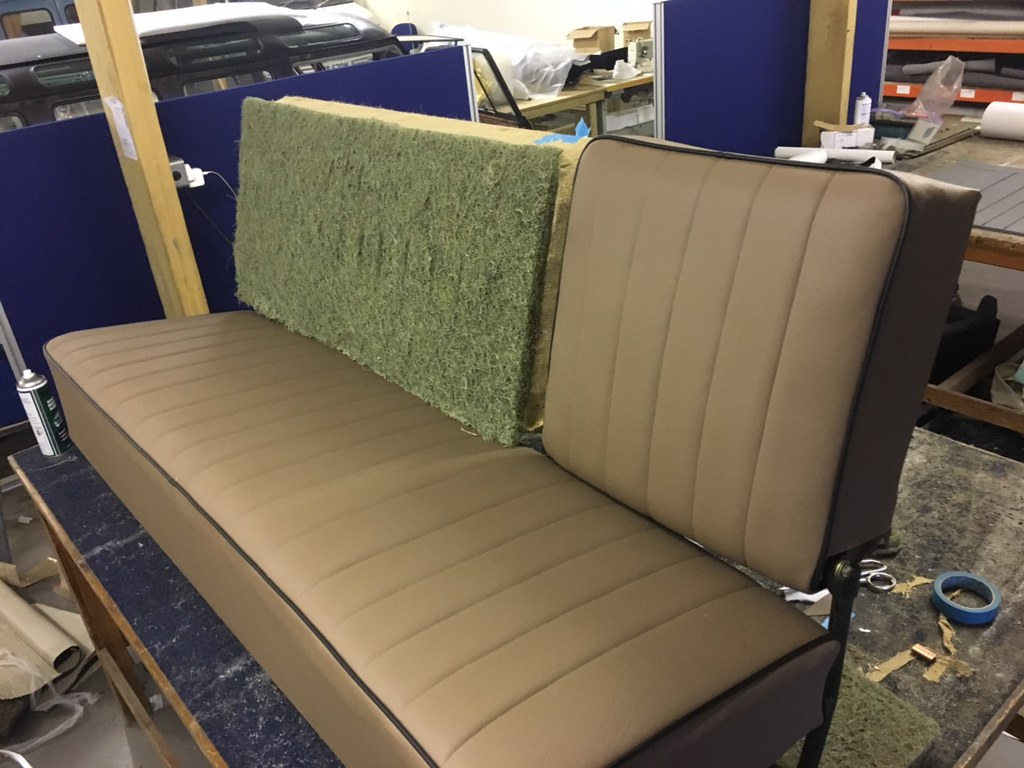 We got there about 7 and he rolled it out for me, i was totally blown away. so much so i didnt take many photos of it. Just grinning from ear to ear. I will take some proper shots of it in the next few weeks. Im so so so happy how its turned out!! The boys a genius!! 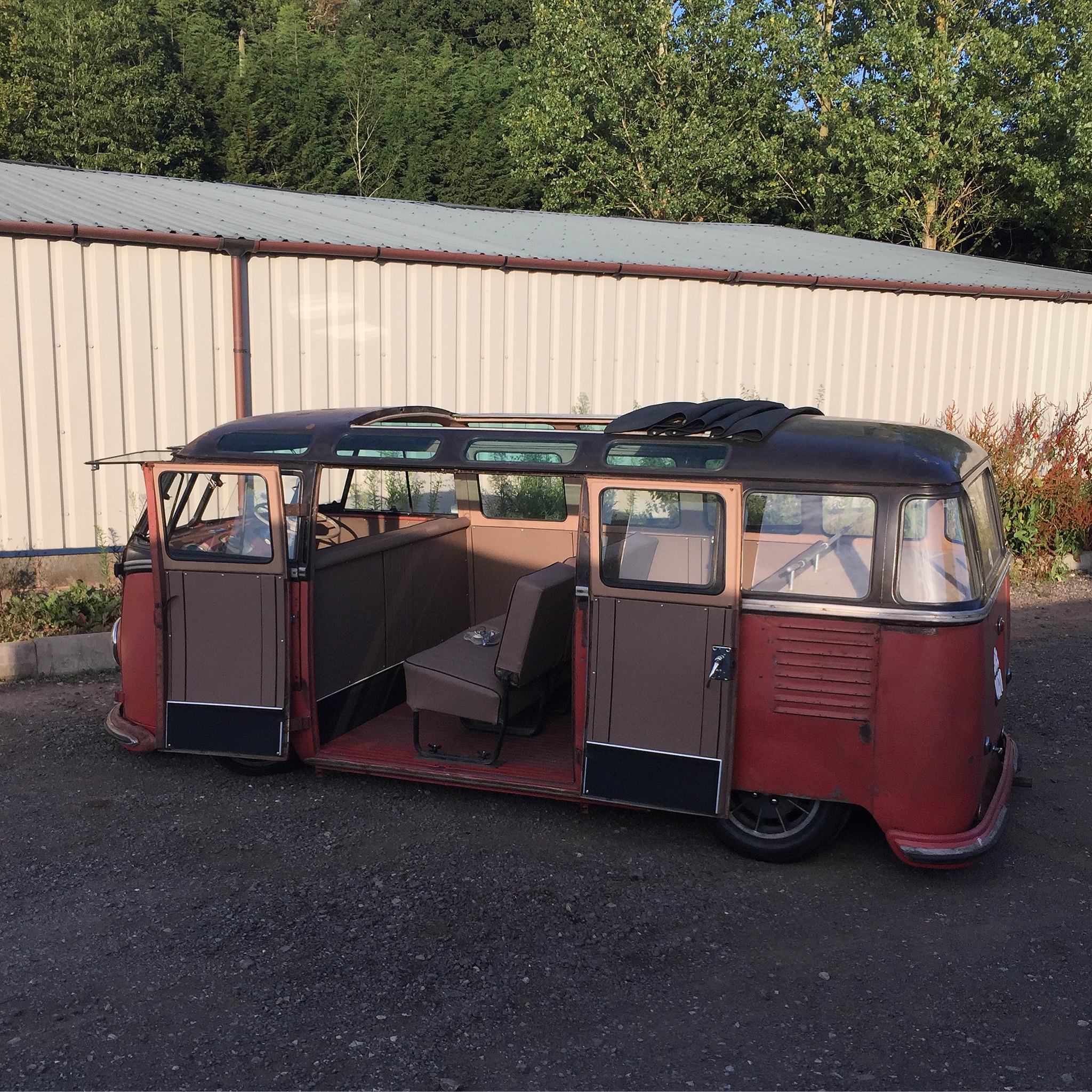 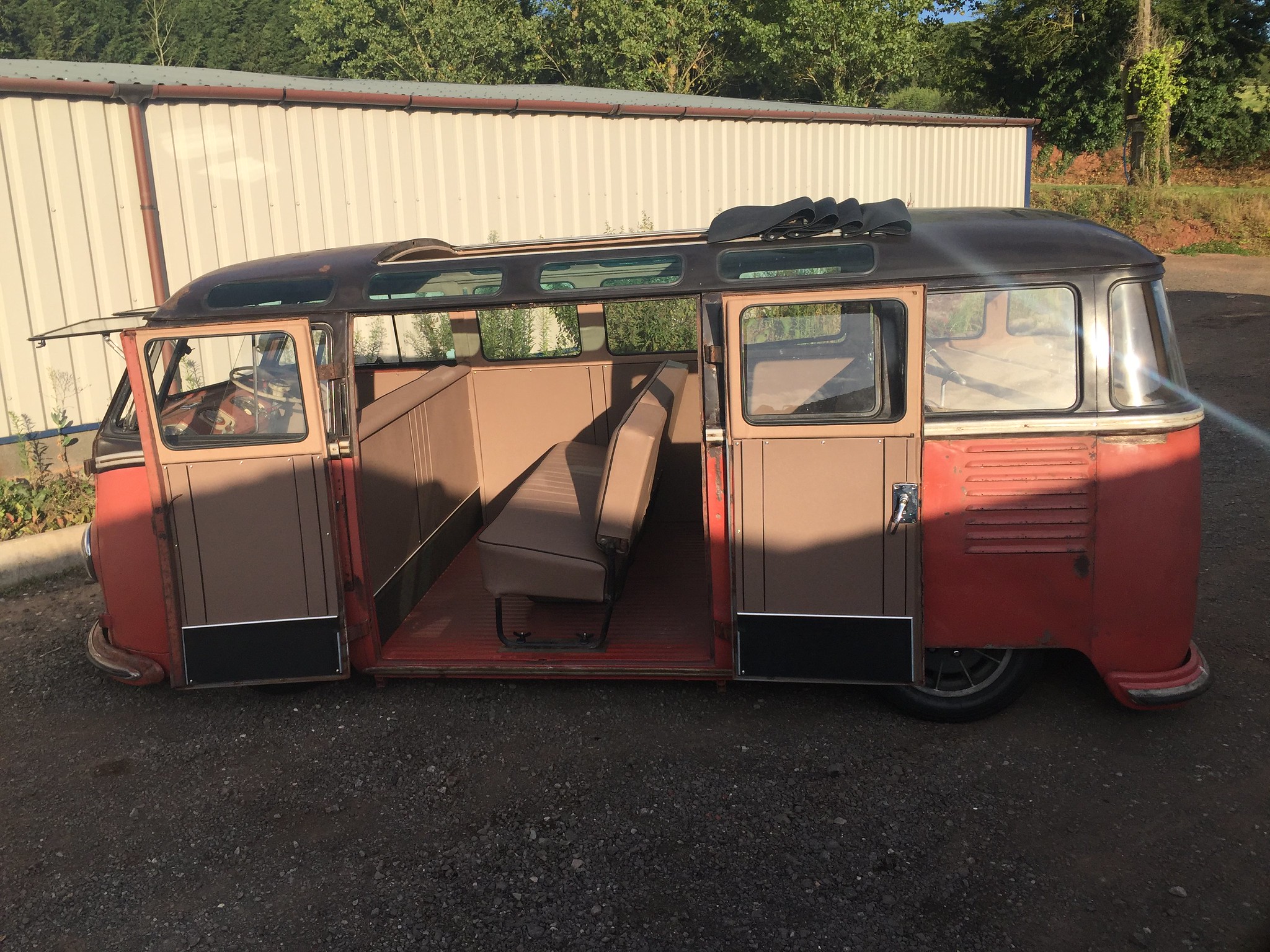 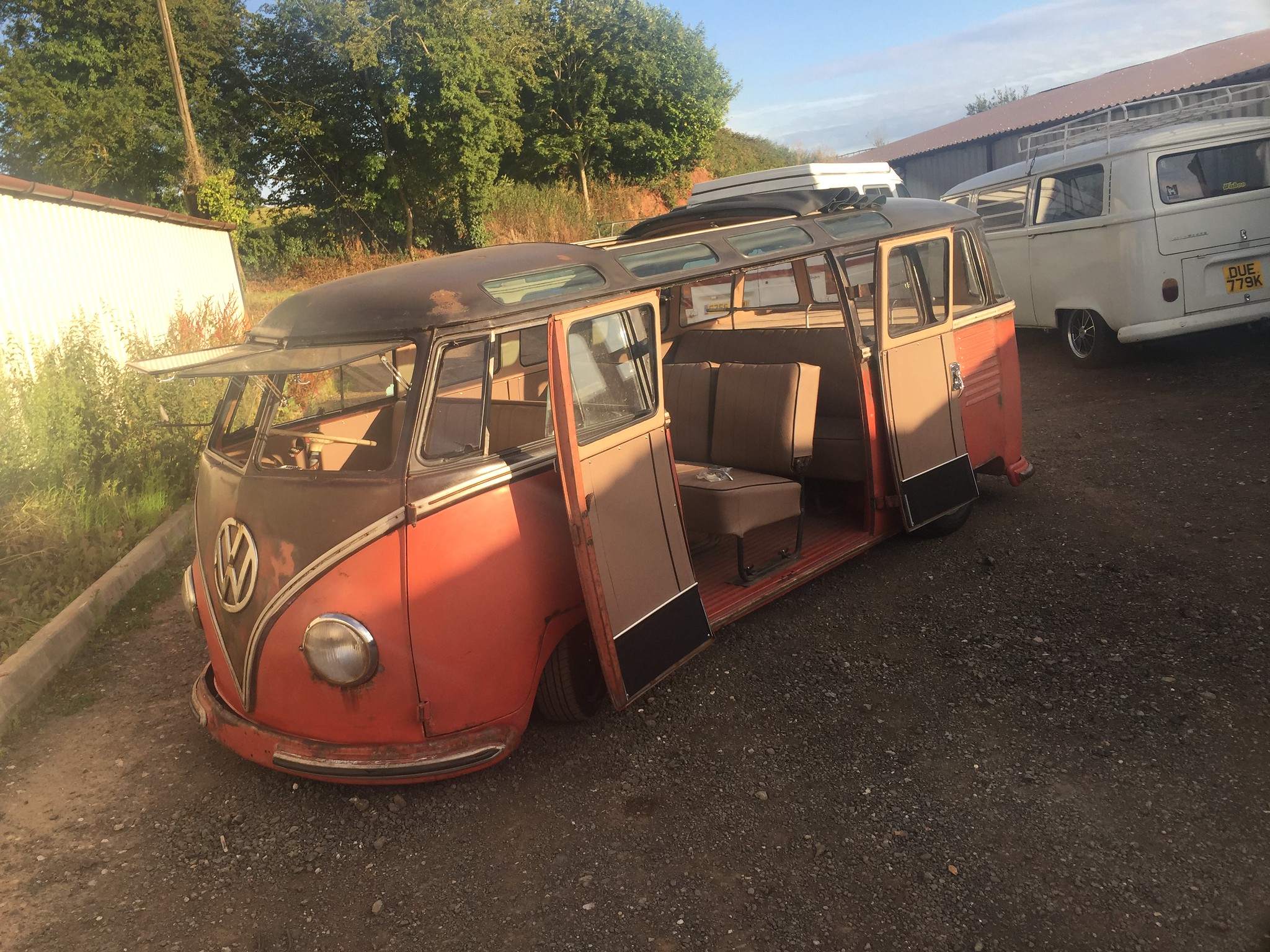 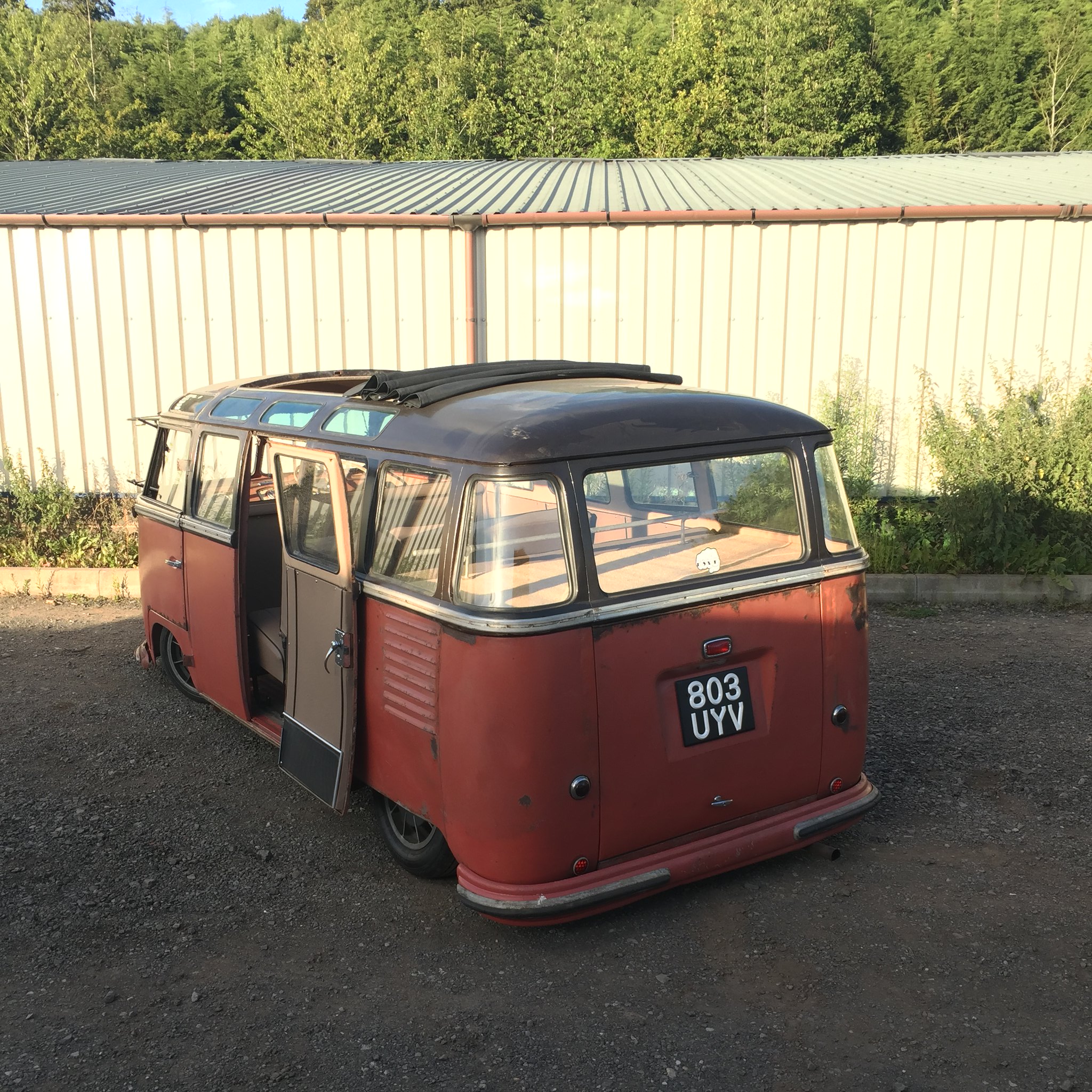 Just enough time to sit in the back with a beer, enjoy the sunshine, should have got a pic of how exhausted and happy Austin looked instead heres one of Rob and the Goat 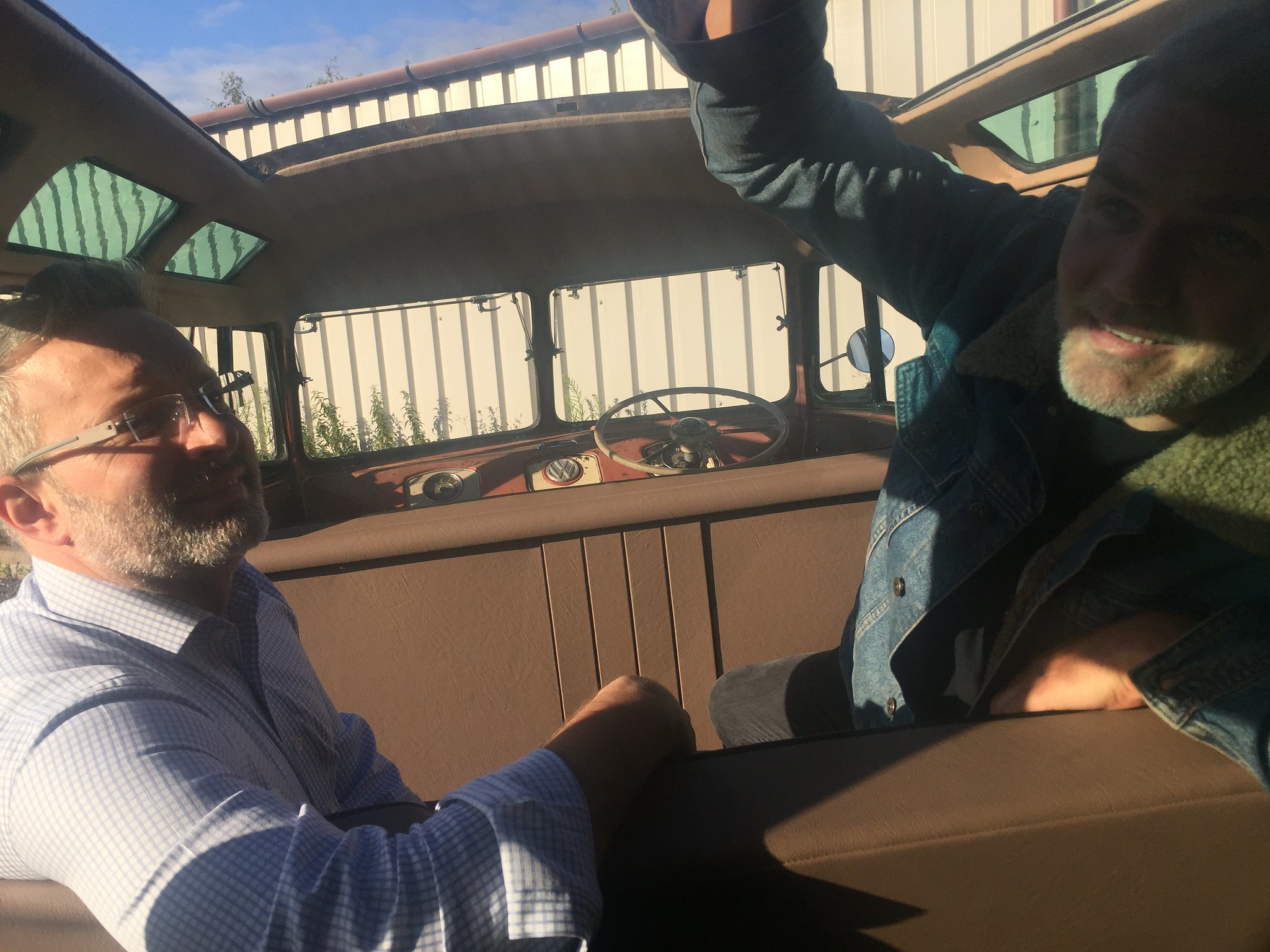 Raced back to the workshop to fit the shocks supplied by Jamie at Machine 7 thank so much dude for getting them to me lighting quick.

Spax gas adjustables which i ran on my last bus, expensive as hell but made the ride quality amazing. 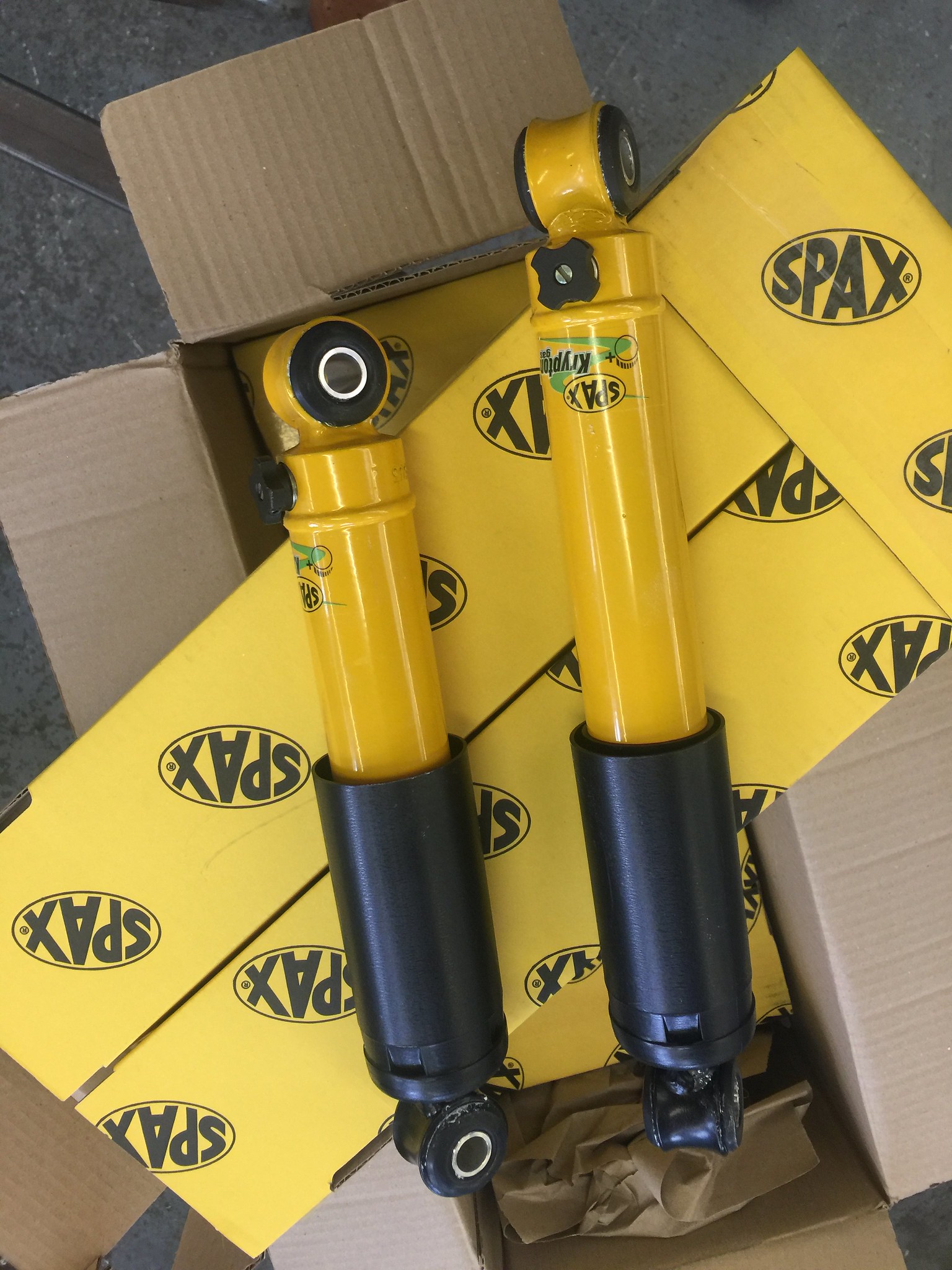 For the time being i'm only fitting fronts, Mike at MPJ fabrications has been a hero and laser cut me some brackets for the rear shocks, These need some strengtheners welding in so for bugjam fronts will have to do. Ill share some pics of that later when i come to pop them in. 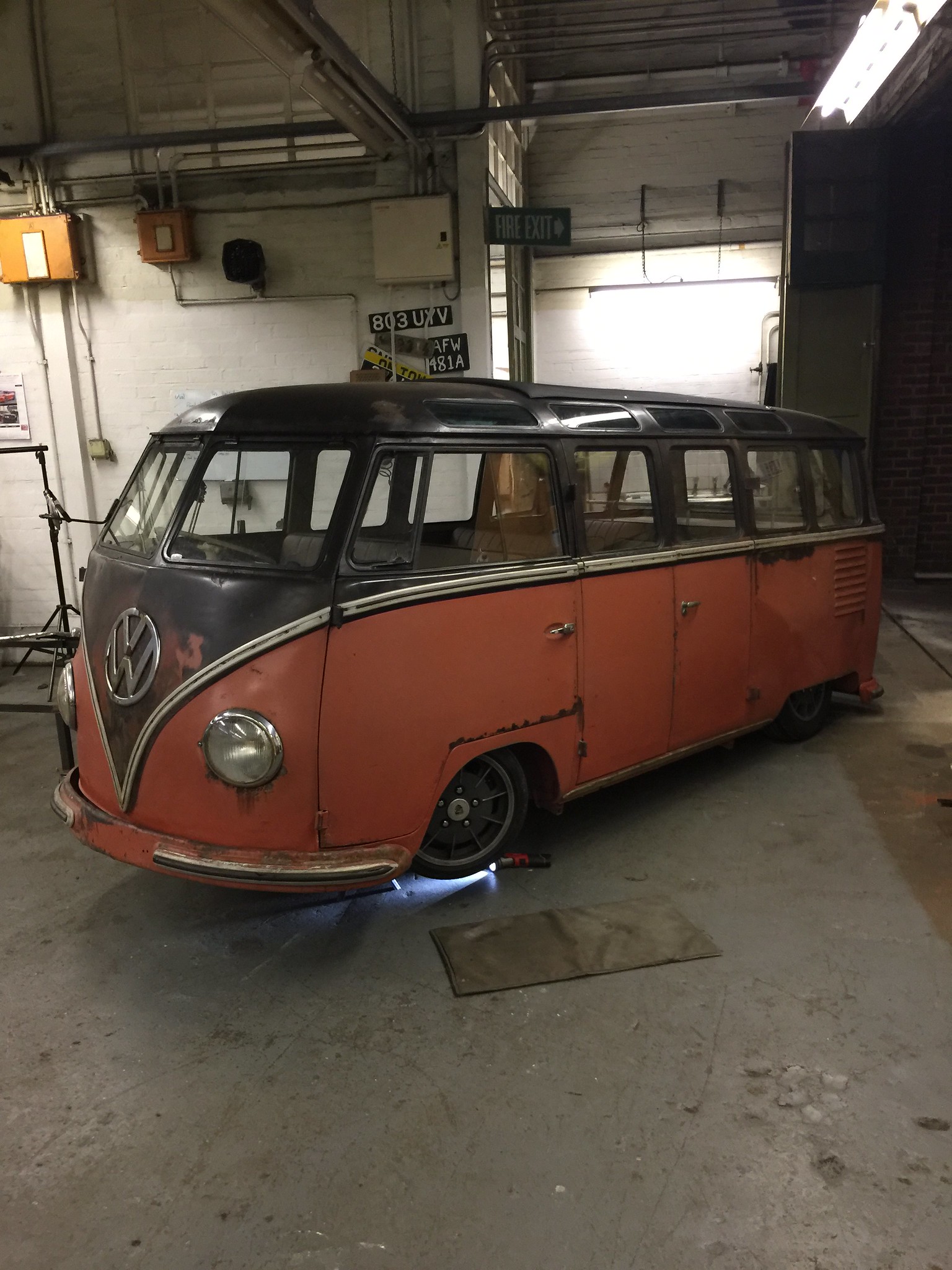 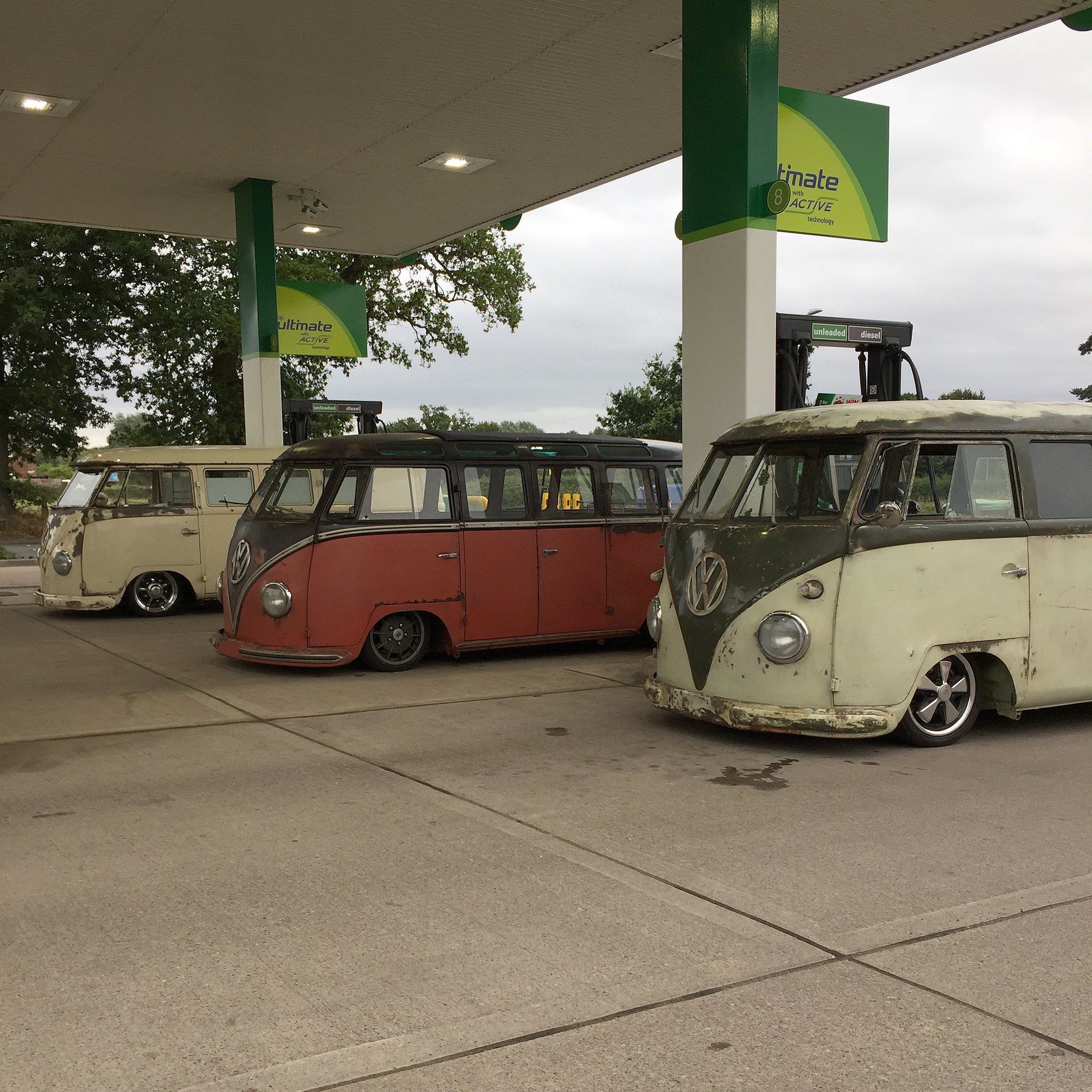 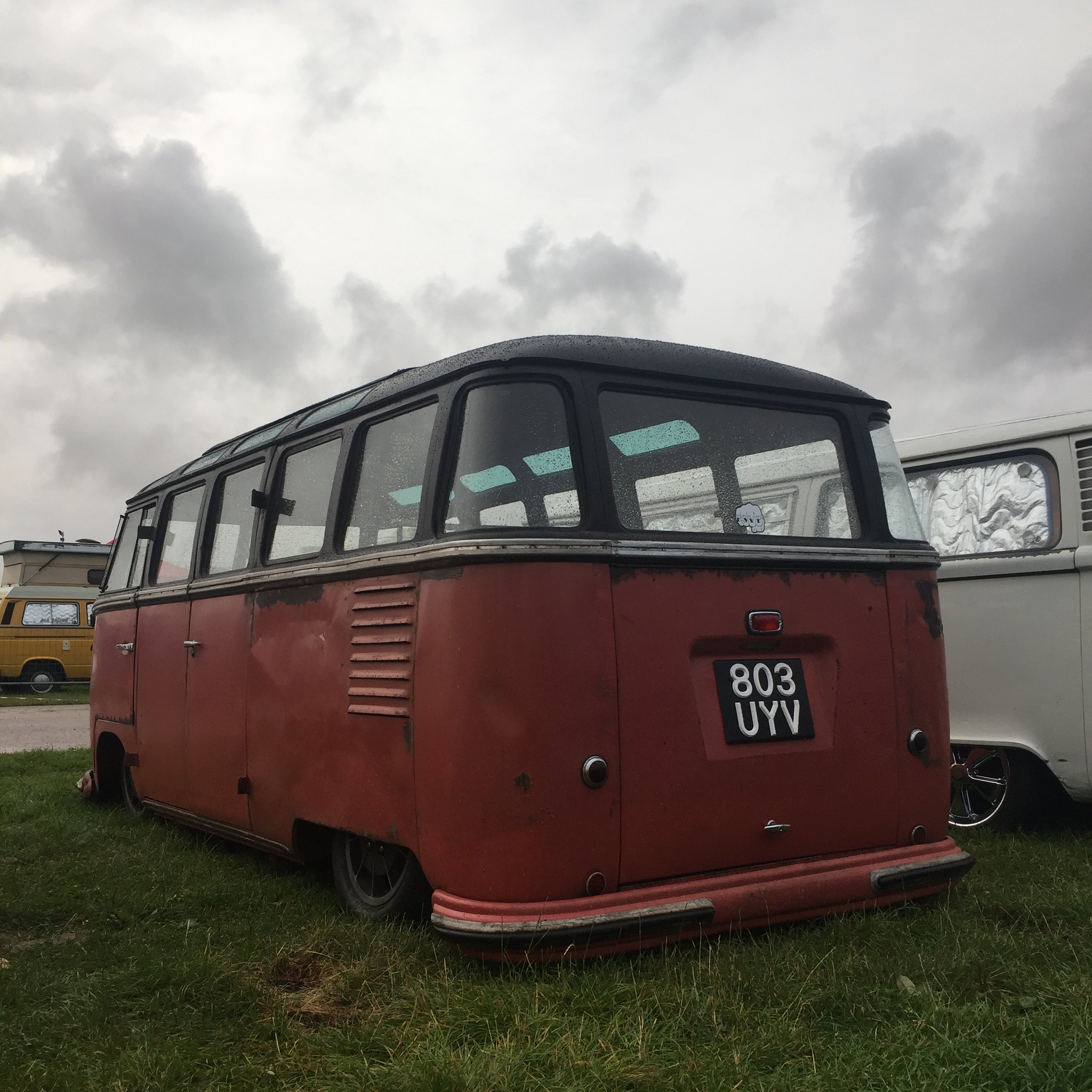 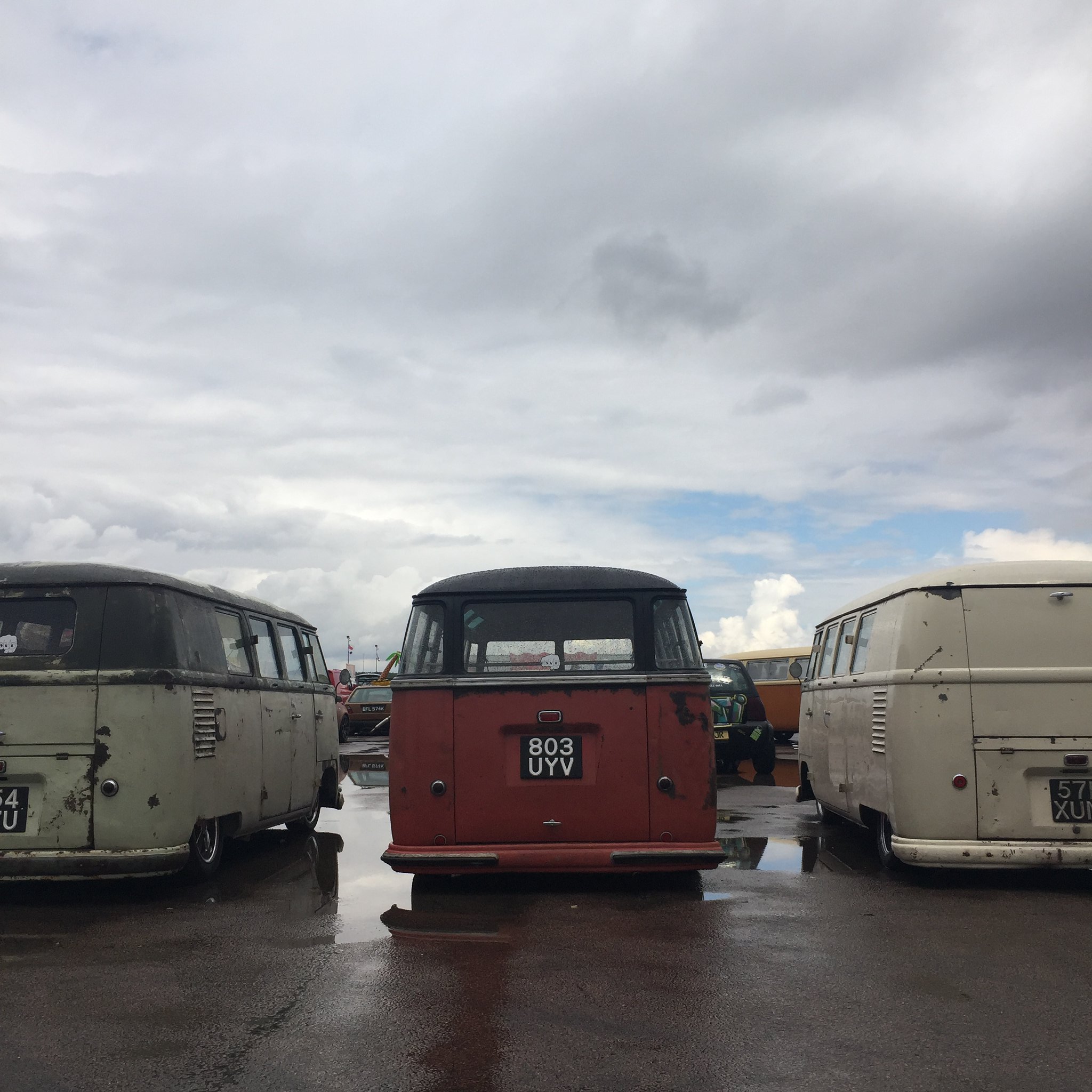 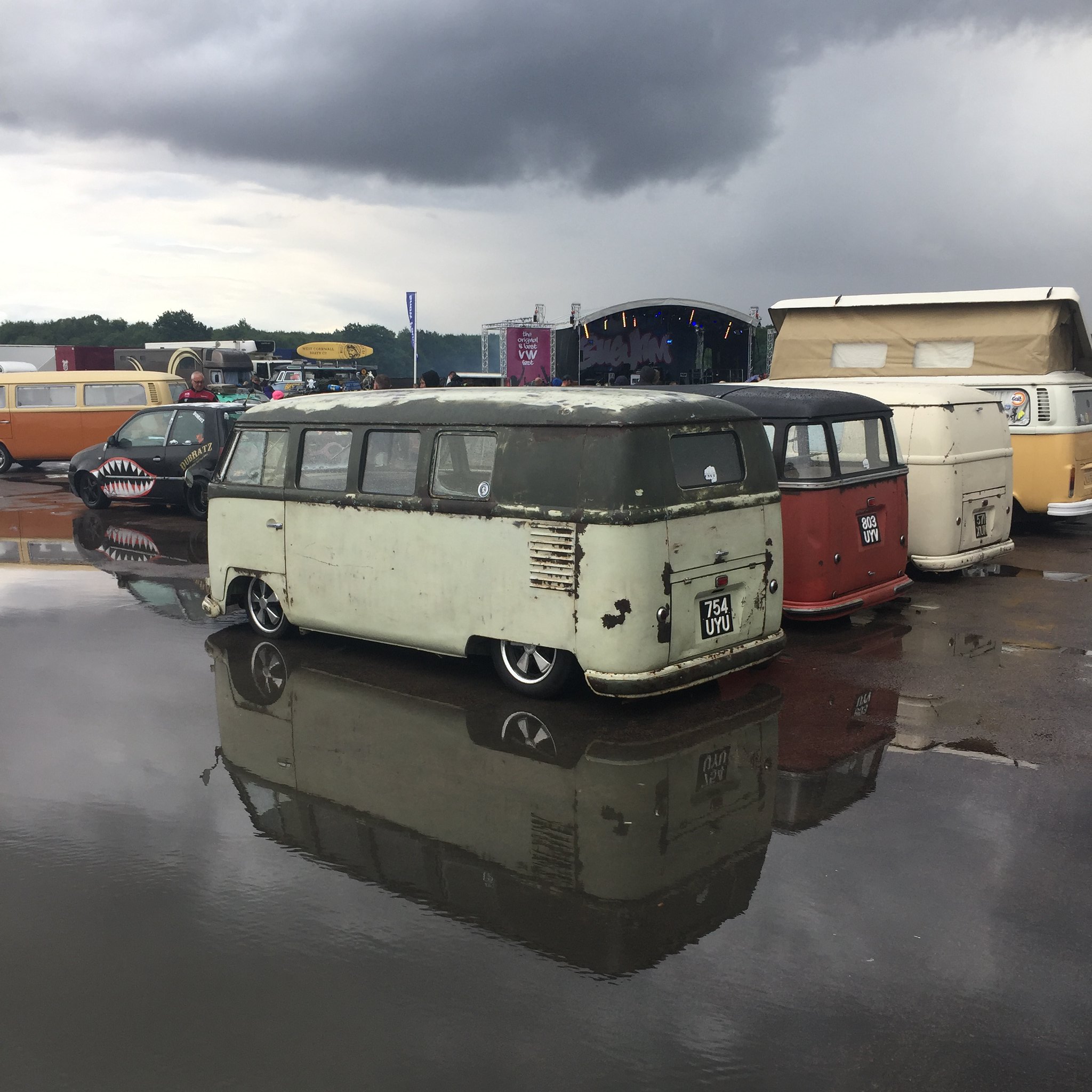 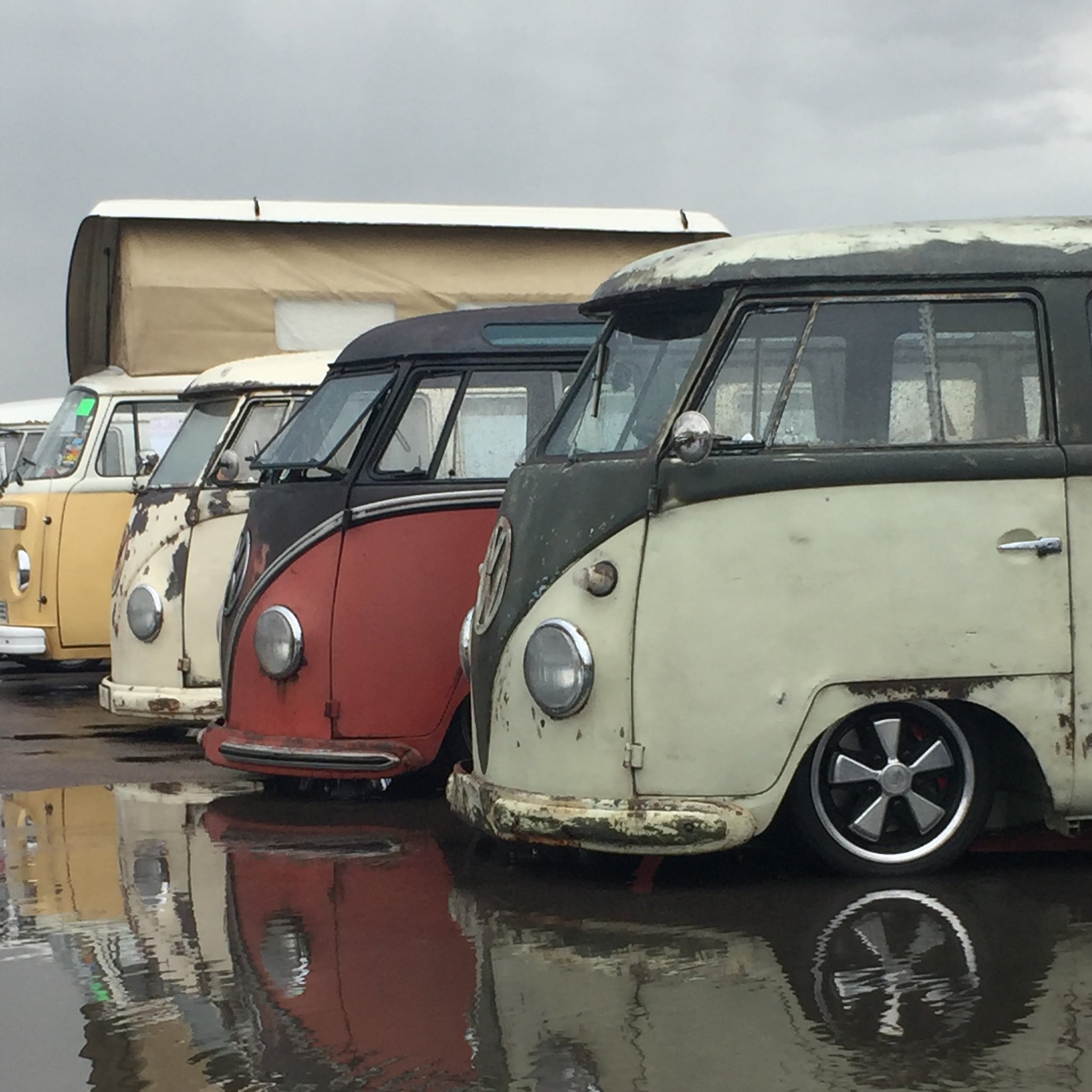 Then just as we were leaving, the bloody sunshine turned up...... 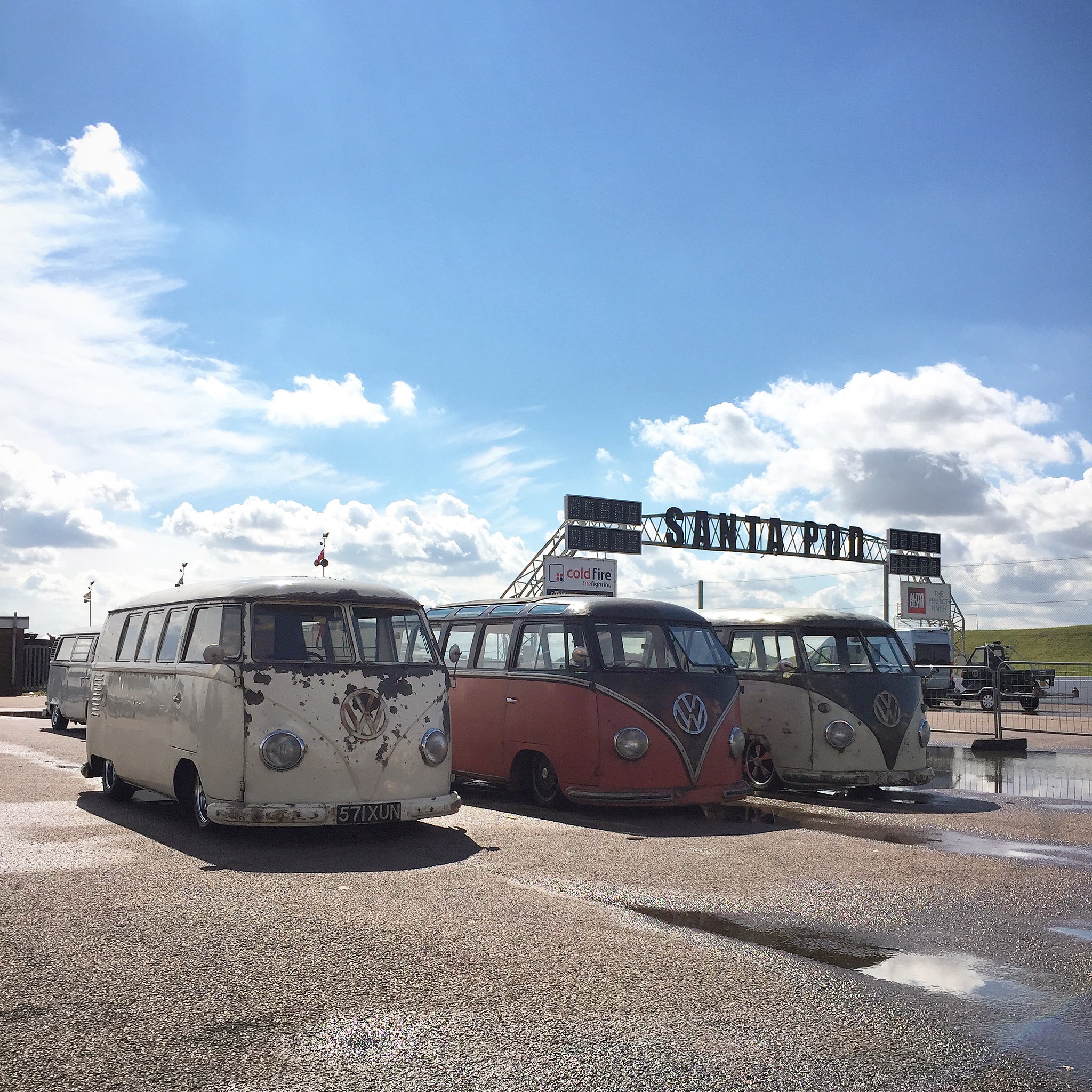 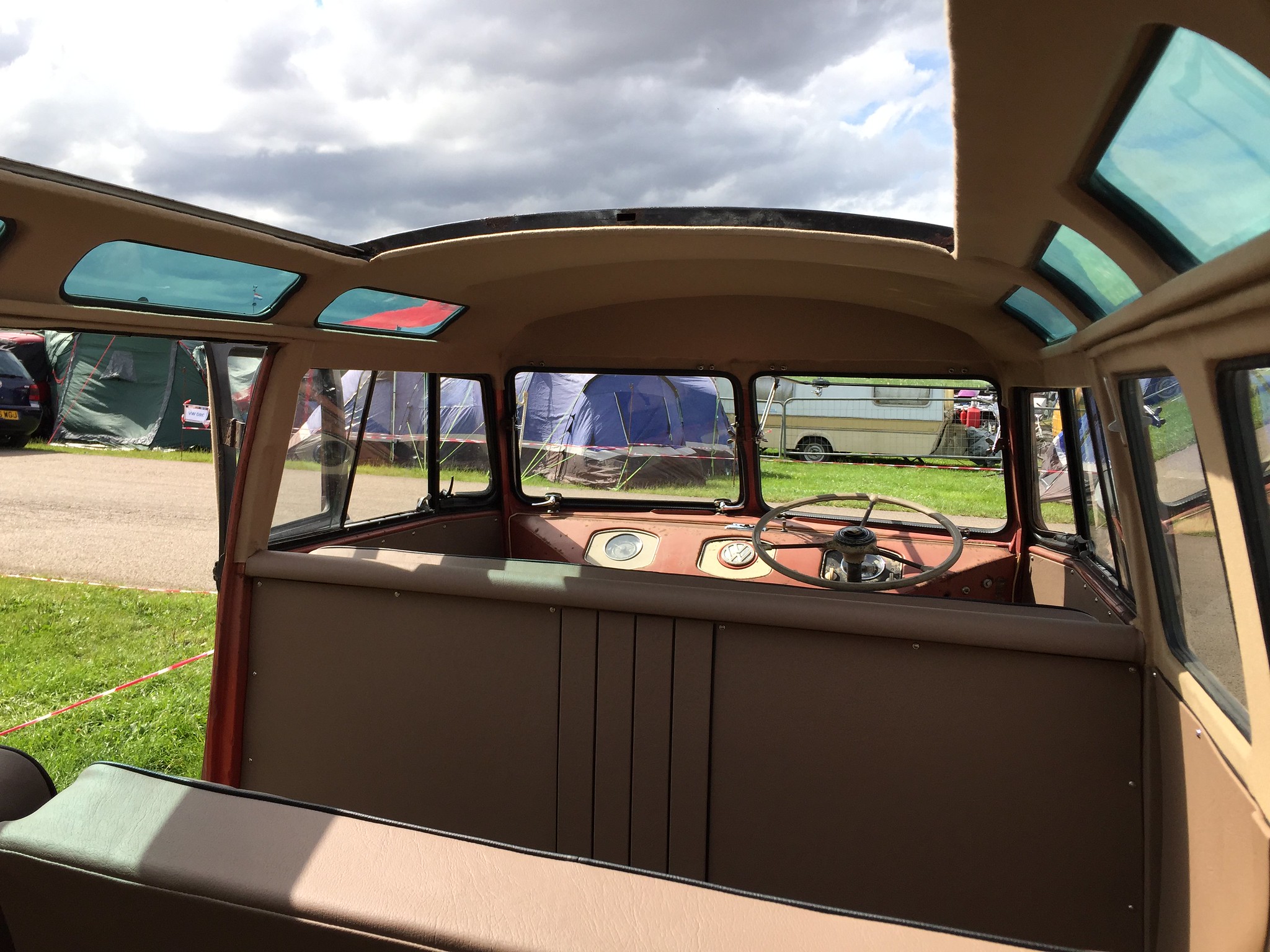 This is looking so sweet, top work by all involved
www.gekkodesigns.co.uk
www.gekkolodge.co.uk
Top
Post Reply
373 posts