When I straightened my doors, the bit that bent was the long leaf of the hinge that is bolted to the A pillar. I was worried about tearing the A pillar or the door, because you can never quite tell what's under the paint. My A pillar and doors are solid though, so no movement there.

The paint on the hinge itself cracked, which showed where it had bent.

I shut the door and whacked the projecting part of the hinge rearward a few times until the door lined up. This meant that I wasn't putting any force through the riveted side of the hinge. I figured that would be the the weakest link.

I used the block lengthways to keep as far away from the bodywork as possible and it took a club hammer, rather than a claw hammer, but the principle was the same. In this case I guess they were trying to lower the rear of the door or shift the door back to stop the leading edge binding. 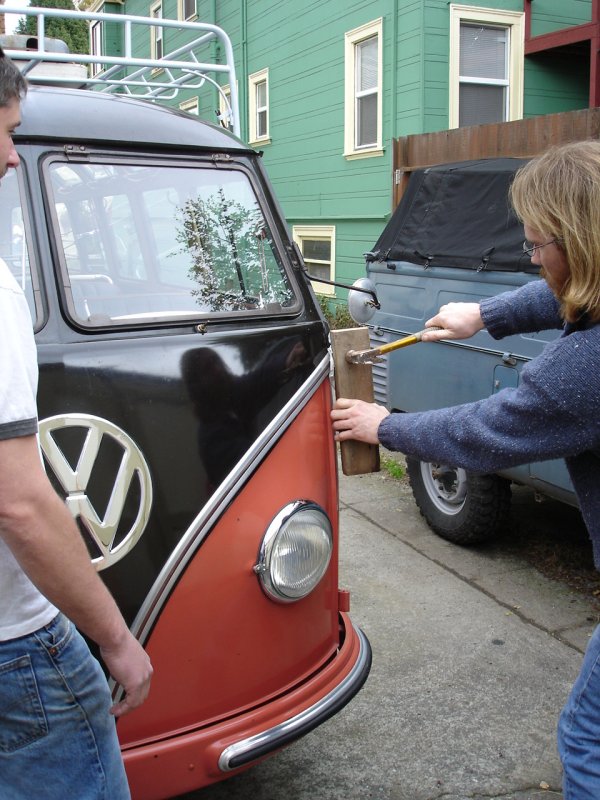 Think the handle technique forces hinge further into the door so pulling the door forward.
Bending the hinge itself will take some doing whilst on the van, did think of cutting it to weaken it bend it then weld down the cut line. Then .grinding it flush.
Top

maddison wrote: ↑
Wed Sep 11, 2013 3:36 pm
..cos the hinge isnt sitting at a 90 degree angle the plane of the door...more like 120 degrees (or whatever it is) moving both hinges in and out moves the entire door backwards or forwards

moving 1...or the other....or both in opposite directions tilts the entire door (depending on the configuration of hinge movements)


& ted, back to your latch issue, have you tried actually moving the latch out **sounds weird...i know...but try it, what have you got to lose
(your door latch has 2 parks , a prelimary one and the main 'closed' push your striker plate too far in and the latch struggles to even make the 1st park engage
Move your striker all the way OUT and you should find your door shuts really easily on the 1st park, give it a good slam and it should engage the 2nd main latch (and be pretty much in line)

unless your bus has had a serious whacking, you shouldnt ever really need to move your striker plate inwards, maybe a tiny tap in and out for really fine adjustment...but never as far in as it will go... it should mainly be used for UP & DOWN adjustment


try moving it back out and see how that works for you
(its always EASIER to get your doors lined up nice with the top frame OFF...its not the BEST way, but its the EASIEST way, once you have everything how you want it...mark your hinge position, pop the door back off, refit the top frame and remount in the same position

LEGEND
1958 splitscreen
1969 custom bug (the only bug to have been on the cover of Volksworls and Ultra VW)
1972 roof chopped bug (volksword, street machine, custom car, vw scene)